EREN Renewable Energy (“EREN RE”) and EDF Energies Nouvelles are announcing the commissioning of three solar plants with installed capacity totalling 87 MWp. The projects are held via EDEN, their solar photovoltaic joint venture in India, with two of them located in the State of Uttarakhand and the other in Madhya Pradesh.

The 36 MWp unit capacity UTT1 and UTT2 solar power plants are situated in the State of Uttarakhand in north-eastern India. 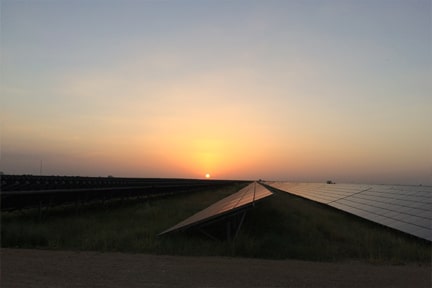 The UTT1 and UTT2 projects were won and developed by an Indian consortium (made up of Omkar Powertech India Private Limited, Profigate Infra Gasoline and Rays Power Infra Private Limited) following the competitive tender launched in 2013 by the Uttarakhand Renewable Energy Development Agency (UREDA) the State agency responsible for developing renewable energies.

This project was won in 2015 following the competitive tender launched by MPPMCL.

EDEN arranged the financing and supervised the construction of these three solar power plants, which were acquired in 2016 and 2017.

EDEN, a joint venture between EDF Energies Nouvelles and EREN RE, develops, builds and operates solar energy projects owned jointly by the two partners in India.

Through their local presence and their team of experts based in Delhi, EDF Energies Nouvelles and EREN RE now operate over 200 MWp in solar capacity in the States of Rajasthan, Uttarakhand and Madhya Pradesh.

Founded in 2012 by Pâris Mouratoglou and David Corchia, Paris-based EREN Renewable Energy (“EREN RE”) possesses renowned expertise and unique know-how in the renewable energies sector. Alongside local and exclusive partners, the company has positioned itself in geographical regions with high-quality wind and solar energy resources in high-potential emerging markets with growing energy needs. In just five years, EREN RE has built a solid and diversified (wind, solar and hydro) asset base representing over 650 MW in capacity in service or under construction across Europe, Asia, Africa and Latin America. EREN RE is also developing a portfolio of over 1,500 MW in renewable energy projects. For more information, go to: www.eren-re.com