EDF Renewables commissions over 100 MWp in solar capacity in Israel

EDF Renewables in Israel is announcing the commissioning of five solar photovoltaic facilities with installed capacity totalling 101 MWp. These new solar facilities contribute to meeting the objectives of EDF’s CAP 2030 plan which aims at doubling its worldwide renewable energy capacity between 2015 and 2030 up to 50 GW. 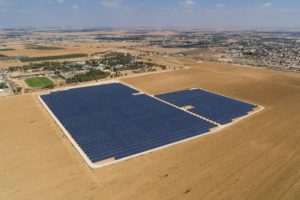 Over the five photovoltaic facilities, four were won in a mid-2017 tender and generate electricity at €47 per MWh, the lowest-ever tariff agreed in Israel. The Group acquired the Mashabei Sadeh solar power plant at the project stage in a separate deal during 2017.

Bruno Bensasson, EDF Executive Vice-President in charge of Renewable Energies and Chief Executive Officer of EDF Renewables, said: “The commissioning of these photovoltaic power plants reinforces EDF Renewables’ leading position in Israel, where we already have over 25% of the installed capacity from renewable energy sources.

Through its CAP 2030 strategy in France and globally, EDF is delighted to contribute here to the fight against Climate change in Israel, with strong ambitions in solar, storage, and wind power.”