Blyth, United Kingdom – October 5th – The installation of five wind turbines off the coast of Blyth, has now been completed – marking the latest milestone in this ground-breaking offshore wind farm development.

The Blyth Offshore Demonstrator Wind farm is a 41.5 MW facility located at about 6km of the coast using three leading-edge innovations around the foundation, the turbine and the cables. 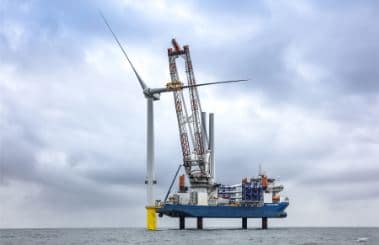 This summer, the five gravity based foundations (GBFs) were installed at the site using a new “float and submerge” process – the first time this method has been used for offshore wind turbines. Designed and built by Royal BAM Group in the Neptune dry dock on the Tyne, the GBFs were floated into position off the coast of Northumberland and submerged onto the seabed and further ballasted to provide the support structures that act as the foundations for the turbines.

The individual turbines have been connected to around 11 kilometres of buried 66kV offshore cables, which will bring the electricity onshore. This is the first time that such a voltage cable has been used for an offshore wind farm. A further 1.5 kilometre of onshore cable will link directly to a new substation built on part of the site of the former Blyth power station. The cable laying works have been carried out by VBMS, a Dutch company specialising in subsea power cable installation.

EDF Group’s Senior Executive Vice President, Renewable Energies, Antoine Cahuzac, said: “We are delighted to act as a driving force and pioneer in the Blyth Demonstrator offshore wind farm alongside industrial innovative players. The completion of this breakthrough project is in line with EDF Group’s major strategic goals in renewable for a low carbon energy sources and innovation to fight against climate change. Our second offshore wind farm project being installed off the coast of the United Kingdom gives us the opportunity to further enhance our expertise in the sector.”

EDF Energy Renewables CEO, Matthieu Hue, added: “The completion of the wind farm is one step closer now that we have achieved this latest milestone. The turbines, the foundations, and the cable are innovative features of this project, which is playing a major role in testing and proving new and emerging offshore installation methods and technologies.”

Once completed, the wind farm is expected to start generating power later this year. With a total generating capacity of 41.5MW, the turbines will produce enough low carbon electricity to power around 34,000 homes.*

EDF Energy Renewables (EDF ER) is one of the UK’s leading renewable energy companies which develops, builds and operates generation projects with a focus on onshore and offshore wind as well as battery storage technology.
EDF ER already operates more than 696 MW of wind farms (including 319 MW in Scotland) and has more than 545 MW consented, 170 MW in planning and 950 MW in development.
EDF ER is a 50:50 Joint Venture between EDF Energy and EDF Energies Nouvelles.