EDF Renewables plays a leading role in the emergence of this new industry, having gained several years of experience by developing projects in Europe. 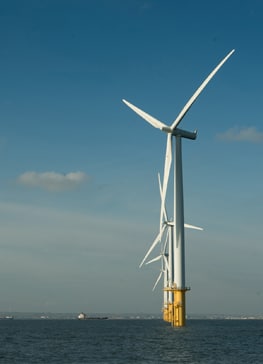 The mature offshore wind technology makes it possible to install wind turbines on the seabed in large projects that take advantage of strong and steady winds. The development of this competitive industrial sector helps diversify the energy mix and drive economic growth.

The market has grown considerably since the first offshore wind farms were installed in Northern Europe the early 1990s. In the single year 2016, 1,558 MW of offshore wind capacity was added in Europe, raising total installed capacity to 12,631 MW.

Among the major countries developing offshore wind, the UK accounts for about 40.8% of overall installed capacity with 5,156 MW. Germany (4,108 MW) and Denmark (1,271 MW) are the other two countries making up the top three (source: Wind Europe).

Steadily, in the course of several projects, EDF Renewables has built extensive experience covering the full range of existing technologies and put together dedicated teams.