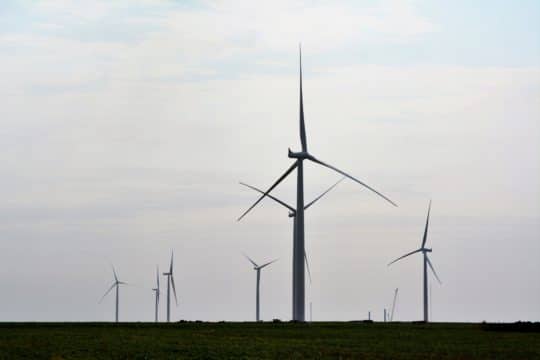 Kimberly-Clark Corporation (NYSE: KMB) signed an agreement with EDF RE for 120 MW of generation which marks Kimberly-Clark’s first utility scale use of renewable energy.

Rock Falls Wind Project, located in Kay and Grant Counties in northern Oklahoma, consists of 60 wind turbines and various components manufactured in the USA. The project has created more than 150 jobs since start of construction in July 2017 along with millions of dollars injected into the local economy.

“We applaud America’s corporate sector and companies like Kimberly-Clark, who through the purchase of wind energy demonstrate leadership in the drive for a low-carbon economy, ” said Ryan Pfaff, Executive Vice President for EDF Renewable Energy.Their commitment allowed Rock Falls to proceed, providing an economic boost to the Oklahoma economy, through new construction and operations jobs, expanded tax base, and recurring, long-term income for participating landowners.”

“We are proud to partner with EDF Renewable Energy on the Rock Falls project, which marks a significant step in Kimberly-Clark’s Energy and Climate strategy,” said Lisa Morden, Global Head of Sustainability, Kimberly-Clark.