Paris, December 11th, 2018 – EDF Renewables in Germany is announcing the repowering of the Eckolstädt wind farm, the first in a series to come.
“Repowering” or renewing means the refurbishment of a facility that has reached the end of its life cycle. The Eckolstädt wind farm initially had an installed capacity of 14.5 MW, which has now been increased to 34.5 MW.
This repowering project contributes to the EDF Group’s CAP 2030 strategy, which is aimed at doubling its worldwide renewable capacity to 50 GW between 2015 and 2030. 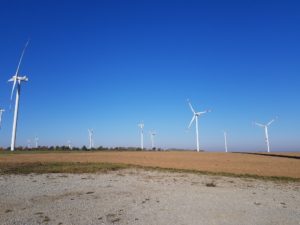 The Eckolstädt wind farm is located in Thuringia, Germany. Developed and commissioned by EDF Renewables in 1999, it initially consisted of 11 first-generation wind turbines.
After obtaining planning permission and benefiting from a 20-year Power Purchase Agreement contract in late 2016, Eckolstädt’s wind turbines were fully dismantled by REETEC, an EDF Renewables’ subsidiary, in early 2018. The wind turbines’ components were mostly recycled and the foundations were crushed to be used as backfill for the platforms of new projects and surrounding roads.

The six-month repowering project was managed by EDF Renewables in Germany.
Installed capacity has been increased by 20 MW to 34.5 MW with a smaller number of turbines.

With the growing number of wind farms due to reach the end of their life-cycle between 2020 and 2030 – representing an installed capacity of around 76 GW across Europe** – repowering is a growth industry in which EDF Renewables has been developing its expertise over the last few years.

* According to the Deutsche WindGuard  study: „Weiterbetrieb von Windenergieanlagen nach 2020“.
** According to the WindEurope association, almost half of the European Union’s installed wind power capacity – 141.6 GW in 2015 – is due to reach the end of its life between 2020 and 2030.

For more information, visit: www.edf-renouvelables.com
Follow us on LinkedIn and on Twitter @EDF_RE in French and @EDF_Renewables in English.

About REETEC
REETEC was founded 1996 in Bremen and is one of Europe’s leading independent service providers for onshore and offshore wind energy. The comprehensive service portfolio ranges from electrical engineering, electrical and mechanical assembly, operation and maintenance services (O&M), rotor blade and tower services, major component replacement and repair, aviation aid systems to qualification and training.
REETEC acquired OWS Off-Shore Wind Solutions in 2017. The joint offshore service centre in Emden offers a service hub for wind turbine generators of the North Sea plus a cost effective full maintenance concept. REETEC/OWS has 350 employees.
Since 2007, REETEC is part of the EDF Renewables Group. www.reetec.eu